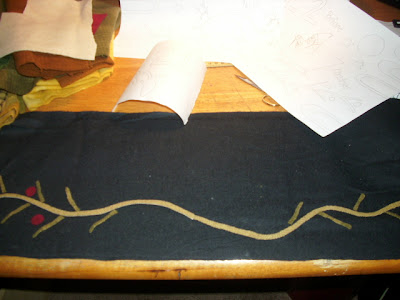 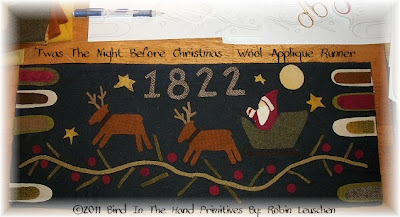 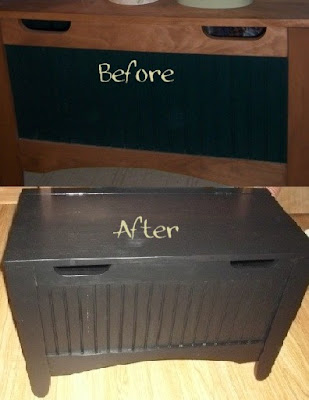 I've been working since Sunday on a wool applique pattern for a runner..It's called "Twas The Night Before Christmas " ( not very original ,I know ). Now, I added the year 1822 because that is when the story(poem actually) was first written, it was published in a New York newspaper under the title "A Visit from St. Nicholas" It wasn't until 1844 that it was credited publicly to Clement C. Moore , when it was included in an anthology of his works.... So...learn something new everyday huh?...lol
I snapped some pics while I was arranging the pieces for placement, and still need to stitch it together then, finish writing out the pattern. It can easily be done up as a hooked rug, punch needle piece or a stitchery also.
and...Yesterday I recruited my 18 year old daughter to paint a bench that hubby had made me years ago. The Hunter Green and natural wood was just soooo country 80's and 90's ....lol...I still have to sand down, distress and go over with a stain....
Now....I am having a Christmas Giveaway !!! I'll post pics tomorrow of the goodies and rules to be entered.....For now, have a super dee duperty great evening !!
Robin
Posted by Robin Leuschen at 12:40 PM

I'm loving that wool applique. I like the addition of the date! I'm working on some penny rug mats right now...it's pleasant to stitch.

Prims By The Water said...

Lovin your wool mat. Makes me want to rush Christmas..but it is just around the corner. Take care, Janice

I love that runner.. in the wool.. very aprapo?. The bench looks wonderful, is that lamp black??
Maggey

I love that pattern, you do wonderful work. A great change on the chest! Hope you have a wonderful week!

Your runner is so cute Robin!!! I hope to start an appliqued mat this evening using a pattern from your last Winter pattern book! It's been calling my name for 2 weeks now and I just haven't had the time to start!

Your bench is going to look so nice with its make-over!!!

Love your mat. You do beautiful work.
And isn't it amazing what a coat of paint will do !

Wonderful pattern! Sign me up for a copy! :-) In the meantime I will try to decide whether I want to applique it, or hook it! Great job on the bench too! It's always a great feeling to have talented helpers!

I think you've outdone yourself with the Santa mat. It's totally wonderful! I'll definitely be purchasing that pattern. ~Roberta

Robin ...I love the wool applique runner ,you are doing a great job ...I better check out some of my patterns ,thanks for giving me the incentive to start something ,I have been in a rut lately...
Nettie

your wool applique is gorgeous! I so love the theme and I just learned alot about "Twas the night before Cmas"! thanks for the info! The black paint already looks sooooooo much better!

Love your wool runner!!! Are you doing a pattern? Pretty please!
christine

I really love your santa pattern, really nice design and layout. I am trying to grab your snowman cabin, but it won't let me.